Have you ever heard of Banoffee Cupcakes? When I first discovered banoffee pie, I thought it meant a combination of bananas and coffee! While I wouldn't say no to that combo, I was way more excited about what it actually stands for - bananas and toffee! These cupcakes are made with a banana cupcake base, filled with toffee sauce, and topped with chocolate ganache frosting!

These aren't just any banana cupcakes and toffee sauce though! While most recipes call for room temperature or melted butter, I took them to the next level by using brown butter in the batter and the sauce. This adds a bit of a nutty flavor which pairs beautifully with the banana and caramel flavors.

Browning butter is super easy! For this recipe, you just need 1 stick of butter for the batter, and ½ of a stick for the sauce. You'll want to brown them separately because the brown bits at the bottom are hard to separate, and the toffee will be made in the pan you brown your butter in. To cook the butter, just place it in a small sauce pan or pot, turn the heat on medium-low, and stir occasionally with a spatula until it's dark and gives off a nutty aroma. Your kitchen will be left smelling amazing!

How to Make the Toffee Sauce

If you've ever made caramel, you know how tricky it can be! This toffee sauce is no exception, but I think I've timed it out so you can make it without any issues! Once your butter is brown, turn your burner to the lowest setting and add in the dark brown sugar. Stir for a few minutes until the sugar has melted. Then, slowly (and carefully) pour in the heavy cream. Turn your burner back up to medium-low and let it come to a boil. Have it boil for 3 minutes while stirring occasionally. When the time is up, turn off your burner, remove it from the heat, and stir in the vanilla extract. If you prefer salted caramel, feel free to mix in a pinch of salt at this time as well!

Making the batter is simple! Be sure to take your cold ingredients out of the refrigerator so they can equilibrate to room temperature. It also helps to mash the bananas before you get started. Then, just mix together the wet ingredients and the dry ingredients separately, and then carefully stir the dry ones into the wet ones. Make sure you don't over-mix the batter! Stop stirring right when the flour streaks disappear. Fill the cupcake liners about ½ - ⅔ full. It should make about 16 cupcakes!

I recommend making the chocolate ganache as soon as possible so that it has time to cool down before it gets whipped into frosting! To make the ganache, add your chocolate to a glass or metal bowl. Heat the cream in the microwave or over the stove until it's simmering hot, and then pour it evenly over the chocolate. Make sure all of the chocolate is covered in the hot cream. Then, place a plate or wrap over the bowl to trap the heat in and let it sit for 5 minutes. At that time, grab a rubber spatula and carefully stir in a circular motion starting from the center, working your way to the sides of the bowl. Keep stirring until it's all melted and smooth and then let it cool and thicken. When it's completely cool, whisk it for a few minutes to turn it into a light and creamy chocolate frosting!

Filled cupcakes are my favorite cakes to make for people because you can sneak a taste and have a peace of mind! When you cut out the centers, you can't stuff the whole cake hole back in with the filling - it won't all fit! So, I just save the tops of the cutouts and snack on the rest. To cut out the holes, you can use a cupcake corer, or just carefully use a sharp knife. Add your toffee sauce to a piping bag and cut off the tip so it's about 1 cm in diameter. Then, pipe the sauce into each cupcake but leave room for the hole top to go back on. Now you're ready to pipe the frosting! My favorite piping tip to use is a large French star tip. With two quick swirls atop the cupcakes, you've got yourself some gorgeous & delicious banoffee cupcakes!

(This post contains affiliate links, meaning that I could earn from purchases made through them. It doesn't add any extra cost to you, but it does help support this blog!) 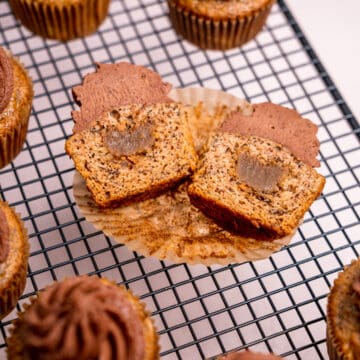 Store cupcakes in an airtight container at room temperature for up to 2 days, or in the refrigerator for up to 1 week. The provided nutrition information is an estimate, the calorie accuracy is not guaranteed.