You might want to sit down for this one. I know I probably say this a lot, but this is legit one of my new favorite desserts. Definitely my new favorite cheesecake! This Chocolate Cherry Cheesecake is no bake so you don't have to worry about a water bath, but it's still oh so creamy! The chocolate flavor is just the right amount of rich (I don't like when chocolate desserts are suuuper rich) and the cherry is a tasty subtle touch. I shared these with my boyfriend's parents and they brought them up 5 times while on the phone that night because they loved them so much!

What You Need to Make This Recipe

Chocolate creme-filled cookie sandwiches & butter: These two ingredients make up the chocolate crust!
Chocolate chips: The main flavor in this recipe! Be sure to use good quality chocolate so that it melts & mixes with the cream properly.
Cream cheese: You can't have cheesecake without cream cheese, right?!
Lemon juice: This adds a little acidity to the cream cheese to help it thicken as it chills!
Sugar: Sweetens up the cream cheese.
Heavy whipping cream: Adds to the cheesecake's creamy texture!

8x8 inch square pan: This one is my favorite! Line it with parchment paper or aluminum foil (hanging over the sides) to easily pull the cheesecake out of the pan!
Hand mixer: I highly recommend using one of these for all the mixing this recipe requires. You could also use a stand mixer with a paddle attachment.
Small/medium saucepan: Something to cook the cherries and sugar in.
Food processor: Chop up the cookies for the crust!

How to Make This Recipe

This recipe is so simple and quick to whip up! It's extra perfect for hot summers since it doesn't require you to turn your oven on!

Start with the crust! The cheesecake filling itself doesn't have a super strong chocolate flavor, so making the crust with chocolate cookies is a great touch. I thought about using graham crackers, but I'm very glad I went with the cookie sandwiches instead! (I think you'll like it too!) Using a food processor, chop up the cookies and then blend in the melted butter. Pour the crumbs out into your prepared pan and spread them into an even layer. Then, using the bottom of a flat glass or your hands, press down on the crumbs. Place the crust in the freezer while you make the rest of the dessert!

Next up is the cherry topping! You can start by removing their pits, or save it for later (I don't have a cherry pitter so I choose the latter). Cook the cherries & sugar in a saucepan over low-medium heat until they've burst and are soft and bubbly. Then, let them cool & pick out the pits.

Finally, the chocolate cheesecake filling! Heat the heavy whipping cream until it starts to boil and then pour it over the chocolate so that it's completely submerged. Cover the bowl of chocolate with a plate for 5 minutes and then stir it until it's a smooth, homogenous mixture (AKA chocolate ganache!) Let it cool and thicken for a bit, then whisk for a few minutes. While it's cooling, stir the cream cheese in a separate large bowl until it's smooth. Add the lemon juice and sugar and combine them well. Then, fold in the whisked chocolate ganache until it's all one color!

And now, assemble the cheesecake! Take the crust out of the freezer and spread the filling over it. Then, drop spoonfuls of the cherry topping on it and swirl it around with a toothpick! Plop it in the refrigerator for a few hours so that it can thicken, and then enjoy!!

Do you have a no bake vanilla cheesecake recipe?

I sure do, and it's in cupcake form! They're my No Bake Cheesecake Bites.

Can I use cherry pie filling instead of making the cherry topping?

Yes, for sure! Keeping things super simple, I like that!

Can I leave out the cherries?

Absolutely! The chocolate cheesecake is delicious on its own!

Can I use a fruit other than cherries?

Of course, the cherries can be swapped for your favorite fruit or jam!

Can I use a round pan instead?

Yes, that will work! A round 9 inch (preferably a springform pan) would also be a good substitution.

How should I store leftovers?

In an airtight container in the refrigerator for up to 1 week. 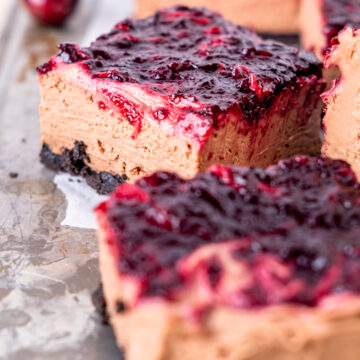 This recipe makes thick cheesecake bars. If you'd like to make them slightly thinner, the recipe also works in a 9x9 inch pan. Store leftovers in an airtight container in the refrigerator for up to 1 week. If you just want chocolate cheesecake, this recipe can be made without the cherry topping. You can also use your favorite fruit preserves in place of the cherry topping! The provided nutrition information is an estimate, the calorie accuracy is not guaranteed.