This Tim Tam Cheesecake is a super simple no bake dessert! It's creamy and made with a Tim Tam crust as well as crushed ones on the inside. If you aren't familiar with Tim Tams, they're an Australian chocolate biscuit made by Arnott's that I ate a ton of while I spent 5 months in Sydney a few years ago. I even stuffed my suitcases full of them when I came back home. I like to say they're similar to Kit Kats, except bigger and much tastier! They also come in a variety of flavors like caramel, double stuffed, dark or white chocolate, etc. My friends all complimented the taste of this cheesecake, especially the crust!

This post contains affiliate links, meaning that I could earn from purchases made through them. It doesn't add any extra cost to you, but it does help support this blog!

Since this cheesecake doesn't require an oven, it's perfect for hot summer days! Plus, it's chilled so it'll help cool you down. However, it's also great for Halloween because you can really use any chocolatey candy in place of the Tim Tams! I love eating this cheesecake any time of the year!

This recipe was inspired by my love of cheesecake & Australia! If you're a big fan of no bake cheesecakes like myself, be sure to check out my No Bake Cheesecake Bites and Chocolate Cherry Cheesecake!

STEP ONE (Picture 1 above) - Make the crust.
Melt the butter in the microwave and let it cool. Break up the Tim Tams into a food chopper and pulse until all the big chunks are broken up. Add the melted butter to the food chopper and pulse for another few seconds. Dump the crumbs into a 9 inch (23 cm) springform pan and spread them out evenly. Using the bottom of a flat cup, press the crumbs into the bottom of the pan. Then, use your hands to press excess crumbs up along the edge. Freeze the crust while preparing the cheesecake.

STEP TWO (Picture 2 above) - Whip the cream.
In a large bowl with a hand mixer, whisk the heavy whipping cream until it reaches stiff peaks. This is when the cream is firm enough to hold its shape when you lift the whisk out of the mixture. Place the whipped cream in the fridge while making the cream cheese mixture.

STEP THREE (Picture 3 above) - Make the cheesecake filling.
Stir the cream cheese with a hand mixer or stand mixer with the paddle attachment until it's nice and smooth. Mix in the sour cream, lemon juice, sugars and vanilla extract really well. Then, gently fold the crushed Tim Tams and cold whipped cream into the mixture.

STEP FOUR (Picture 4 above) - Assemble the cheesecake.
Make sure the crust is cold and firm, then pour the cheesecake mixture over it. Spread it around evenly and then refrigerate overnight.

HINT: Don't leave out the lemon juice! This is added as an acid to help the cheesecake firm up as it sets. It won't add a lemony flavor to the dessert.

This recipe has not been tested with any substitutions. If you do try substituting any of the ingredients, please leave a comment below letting us know how it worked out!

If you want to use a different candy or biscuit instead of the Tim Tams, go for it! Kit Kats would work great, but you may need a greater number of them for the crust. I recommend using a candy with a biscuit aspect to it so that there's some structure provided in the crust, or you could use an Oreo or graham cracker crust. However, you can crush up any candy for the filling! This recipe would be great for using up chocolatey Halloween candy.

This recipe makes enough cheesecake and crust for a 9 inch springform pan. A springform makes the cheesecake much easier to remove from the pan, but you can use a 9 inch round or square pan instead.

For the crust, you'll need a food chopper (AKA food processor) to crush the biscuits in. A small blender should work as well.

Where can I find Tim Tams?

If you don't live in Australia where they're available in most grocery stores, I recommend checking Amazon, World Market or Target.

Do I need to let the cheesecake chill overnight?

Yes! I highly recommend letting it sit covered in the refrigerator for at least 6 hours so that it can firm up.

How should I serve this?

For best results, serve the cheesecake right after taking it out of the refrigerator and cutting it into pieces. I also like to decorate the top with whipped cream and Tim Tams, but this is optional.

How many slices does this divide into?

I cut this into 8 equal triangles. However, you can adjust the slices to be smaller or larger to get more or less pieces.

Did you try this recipe?
Tag @brokenovenbaking on Instagram and leave a star review below! 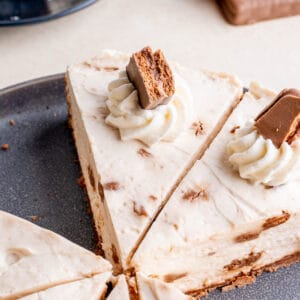 Store in an airtight container in the refrigerator for up to 1 week or in the freezer for up to 1 month. If you're storing it in the freezer, let it thaw in the refrigerator for a few hours before serving. If you don't have a springform pan, a 9 inch round or square pan should work as well. In this case, I'd recommend covering the pan with parchment or foil and letting it hang over the edge so that you can easily lift the cheesecake out after its set. The provided nutrition information is an estimate, the calorie accuracy is not guaranteed.

Be a part of our fun & supportive baking community where we choose a theme and share our bakes on Instagram every month!
January's Theme: Winter Fruits