Lavender honey lattes are my favorite drink to start my mornings with! I drink them hot in the winter and iced in the summer. Now that summer is approaching here, I got an idea to make this latte into an ice cream flavor! This Lavender Honey Ice Cream is so easy to make and it's no churn so it's made without an ice cream maker!

(This post contains affiliate links, meaning that I could earn from purchases made through them. It doesn't add any extra cost to you, but it does help support this blog!)

No Churn Ice Cream Must include sweetened condensed milk, right?

I was determined to make a no churn recipe without sweetened condensed milk. So, I brainstormed ways to replace it. It's a fat, and the fat in churned ice cream is egg yolks, so why couldn't I use those instead? Well, there's the whole raw egg problem. I know some people eat raw eggs, but I'm not about to risk salmonella. I decided to try cooking the egg yolks on the stove before mixing them in with the whipped cream. To my surprise, it worked great! However, my first couple of attempts resulted in extremely soft ice cream that didn't freeze very well. This told me my egg yolk to whipped cream ratio was off. I decreased the yolk count and the next few trials worked perfectly! So, I am extremely excited to bring you no churn ice cream without sweetened condensed milk!

How to Make No Churn Ice Cream

Most no churn ice creams are made by whisking the heavy whipping cream to soft peaks (thick enough to hold itself together but still a bit droopy when you lift the whisk) and then folding in the sweetened condensed milk and flavoring. Since this recipe doesn't use condensed milk, it has a few extra steps and takes a bit more time. It's so worth it, though! It tastes just like normal ice cream and has a perfect creamy consistency!

For this recipe, you'll still want to whisk the heavy cream to soft peaks. However, you'll also need to constantly whisk the egg yolks, sugar, honey, lavender syrup, salt, and purple dye together in a small/medium saucepan over low-medium heat until the mixture reaches 160 degrees Fahrenheit. This will only take a few minutes and should be checked using a kitchen thermometer. Once it reaches this temperature, remove it from the heat and transfer it to a heat-resistant bowl. Put it in the refrigerator to chill, but pop in and whisk it every 5-10 minutes. Once the egg mixture is cold but still liquidy, give it one last stir and begin folding it into the whipped cream ⅓ at a time. When it's a nice homogenous mixture, pour it into a frozen loaf pan and put it in the freezer immediately!

Some of you might be wondering: okay, Kayla, you said you turned the latte into an ice cream flavor, so where's the coffee??

Have you ever tried an affogato? It's another one of my favorite ways to consume coffee & ice cream! An affogato is ice cream served with a shot of espresso poured over the top! This is the dessert form I had in mind when creating this recipe, and it's everything I ever dreamed of! The ice cream is delicious on it's own, but even more incredible with espresso! Although, I'm a bit biased. I also wanted to keep the espresso separate from the ice cream for those who don't like the taste of coffee! However, if you do like it, give this affogato a shot! (Pun intended.) Since the ice cream is pretty soft, I chill the espresso before pouring it over the scoops. This also keeps it colder for the hot summer days! 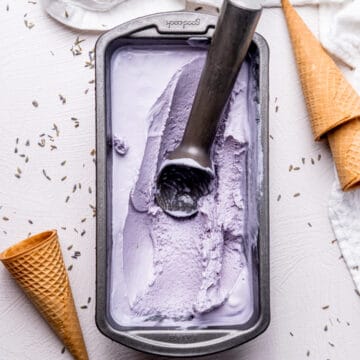 The provided nutrition information is an estimate, the calorie accuracy is not guaranteed.

Be a part of our fun & supportive baking community where we choose a theme and share our bakes on Instagram every month!
November's Theme: Pie!