Let's be real, s'mores aren't a very elegant treat. They're usually made by roasting marshmallows on a dirty stick out in the woods while you're sitting around in clothes that smell of campfire smoke. But that's also such a huge reason why I love them so much! Hanging out with friends while we made s'mores around a bonfire was a normal summer night growing up in Wisconsin. However, it's nice to get dressed up sometimes (especially after a year and a half of quarantining)! Presenting S'mores Macarons - a fancy s'more that's graham cracker shells filled with chocolate ganache and toasted marshmallow cream!

Macarons can be so difficult, but I've recently started making them using the Swiss method instead of the French method and my success rate has increased exponentially! (Although my new oven could also be playing a role in this.) The difference in the methods is that the Swiss method heats the egg whites & sugar while the French method does not. It only adds a few extra minutes to the process but makes such a huge difference!

I heat the egg whites & sugar while constantly whisking in my stand mixer bowl on top of a pot of simmering water until it reaches around 100 degrees Fahrenheit (I check this using a thermometer). I'm not positive why this step yields such better results, but I'm guessing the heat helps the sugar melt into the egg whites & better combine them. Some people recommend aging the egg whites for a few hours to try to dry them out before using them for meringue, so maybe the heat helps dehydrate them a bit as well. Whatever the reason, I'm glad it works!

Once you can start to see more of a transparent syrup beneath bubbles in the mixture & it's around 100 degrees F, move it over to the stand mixer fitted with a whisk attachment. Start off at a low speed to give the meringue some time to cool down. Increase the speed by 2 notches every 3-5 minutes. Once the meringue starts to get white & thick (around speed 8), add the vanilla extract and kick it up to full speed. I've found that reaching soft peaks is optimal for this macaron method. (Soft peaks are when the meringue holds together but is still a bit droopy.)

Generally, almond flour & powdered sugar are folded into the meringue. However, since these are s'mores macarons, I've added crushed graham crackers in the mix as well. This might take some extra sifting or chopping since graham cracker crumbs can be much more coarse than flour & confectioners' sugar. You can use 23 grams of graham cracker crumbs or make your own. I weigh graham crackers (about 1 ½ sheets) into my food chopper and chop them up a bit before adding in the almond flour and powdered sugar. Then, I'll go between chopping and sifting until it's a nice & fine mixture. If there are a lot of coarse pieces left, they're going to stick out in the macaron shells and look lumpy.

While folding the dry mixture into the meringue, go slow! You don't want to add too much air to the batter during the macaronage process. The more air that gets in, the more bubbles there will be in the shells, preventing the macarons to rise properly. This is also why you should bang your pan on the counter & pop any air pockets after piping the shells! When the batter is so smooth that you can lift a spatula full of it and have it trickle down & create a figure 8 without breaking, stop folding! Add it to your pastry bag with a medium round tip and pipe your shells onto your baking sheet! Silicon mats are great for helping macarons rise properly & have smooth bottoms, but if you don't have one, parchment paper can work as well!

Finish off the signature s'mores flavors with chocolate ganache and marshmallow cream! I made my own marshmallow meringue because it holds its shape well when it's piped with a star tip. Add a little flame to it, and it has a cool design! The torching isn't necessary, I just love using my torch as much as possible! I assembled the s'mores macarons by piping a dime sized ball of chocolate ganache in the middle of a shell, and then swirling marshmallow cream around it (and vice versa). Then I carefully torched around the cream!

Why is this recipe in grams?

Macarons are very finicky so it's important to prevent as many errors as possible! Measuring with cups can be inaccurate and subjective, but using a scale to measure weight is very accurate!

Yes, absolutely! These will be just as delicious with marshmallow fluff instead of the meringue.

Do I have to bang the pan on my counter after piping the shells?

Yes! This allows the air bubbles to surface so that your macarons don't have pockets or crack. I put my earplugs in, drop my pan 5 times, smooth out the bubbles, and drop it a few more times.

Do I have to let the shells sit at room temperature before baking?

Yes, let them sit on the counter until they're smooth and dry to the touch. It usually takes mine about 40-50 minutes but will vary depending on your kitchen's temperature & humidity.

How should I store these macarons?

Store them in an airtight container in the refrigerator for up to 1 week. I also recommend refrigerating them for 1 day before eating to allow the shells to fill up and flavors to combine. 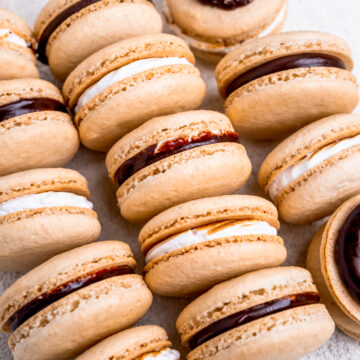 *Oven temperature is important for macarons to rise correctly. Keep an oven thermometer so you can check its temperature before & throughout the baking process. Optimal macaron baking temperatures can also vary by oven, but should be between 300-325°F. Store macarons in an airtight container in the refrigerator for up to 1 week. The provided nutrition information is an estimate, the calorie accuracy is not guaranteed.

Be a part of our fun & supportive baking community where we choose a theme and share our bakes on Instagram every month!
January's Theme: Winter Fruits