I've been missing the camping life so I decided to make some s'mores at home! Well, s'mores donuts, that is! These fluffy homemade donuts are filled with marshmallow buttercream, dunked in chocolate ganache, and sprinkled with graham cracker crumbs!

Pre-pandemic, my boyfriend and I booked flights to California for a week of camping and hiking in Yosemite National Park, but it was cancelled. We went on our first camping trip to Zion National Park in October 2019 and it was such a blast! S'mores were a nightly treat we enjoyed by the campfire surrounded by cliffs and mule deer! These donuts definitely help make up for our postponed trip to Yosemite.

Yeast donuts may seem intimidating, but they're actually pretty simple to make! The key is to make sure your milk is the right temperature in the first step. If it's too hot, it'll kill the yeast, preventing the dough to rise. You also want to be careful while adding the flour. After adding about 3.5 cups, gradually sprinkle a little bit in at a time while mixing. You'll know the dough is ready when it starts to pull away from the sides of the bowl. I like to test it by gently pushing on it with a finger. If it feels moist but doesn't stick, it's good to go!

After proving, roll out the dough to ½ an inch and cut out circles using a donut cutter or a pint glass. Then, after a second proof, it's time to fry! This is my least favorite part because hot oil is scary! BE CAREFUL! I have a designated old sweatshirt and apron that I always wear during this step in case any oil splatters on me. It's also important to keep the oil's temperature around 365°F so the donuts fry properly. Check this every once in a while with a thermometer.

At no cost to you, I may earn from purchases made through affiliate links on this page.

Once the frying is over, it's time to fill and dunk them! Sure, they're a bit more work than twirling a marshmallow over a fire, but they're so worth it! I mean, look at the marshmallow cream oozing out of that pillowy donut covered in a blanket of chocolate! Next time I go camping, I'm bringing these with me! 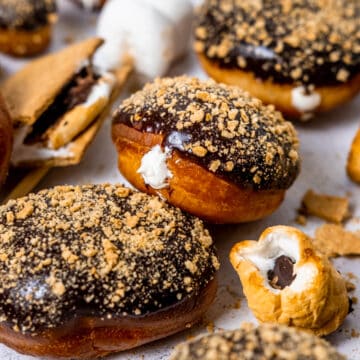 The provided nutrition information is an estimate, the calorie accuracy is not guaranteed.

The Birth of BOBCO »

Hey, I'm Kayla! I'm a self-taught baker, recipe developer & food photographer in Chicago! This blog is a way for me to share recipes, tips, and everything I love related to baking & photography. If you have any questions or want to connect, I'd love to hear from you!
Read more →

BAKE & LEARN WITH ME!

Be a part of our fun & supportive baking community where we choose a theme and share our bakes on Instagram every month!
May's Theme: Strawberries!