Do you love cinnamon rolls and donuts? I've combined the two in this fun and easy Cinnamon Roll Donuts recipe! These donuts use a little bit of yeast, but instead of frying them, they're baked! Don't be intimated by the yeast, though! I'm going to walk you through every step and at least there's no frying with hot oil involved (which is much scarier)!

This small batch of donuts is amazing for breakfast, dessert and snacking! They're cinnamon rolls twisted into a donut shape. Kids will love pulling them apart and dipping them in cream cheese icing! (And let's be honest…adults will too!) And, if you need a treat to celebrate Doughnut Day on June 4th, this is it!

Substitutions: This recipe has not been tested with substitutions. If you do replace any ingredients, please let us know how they turned out in the comments below!

Variations: These can be made in a cupcake pan for more muffin-like braided cinnamon buns! They can also be made with premade dough, like the Pillsbury Crescent Dough Sheets.

Making these donuts is pretty similar to making my Snickerdoodle Rolls. The steps for the dough are the same, so check it out if you'd like more photos to reference!

Step One (Picture 1 above) - First, we're going to activate the yeast. Heat the milk in the microwave or in a small pan over the stove (stirring every ~30 seconds) until it starts to boil. At this point, it's too hot for the yeast, so we're going to cool it down by melting the butter and dissolving the sugar in it. It should be about 95°F after doing so, but I recommend checking with a thermometer. Adding the yeast when it's too hot can kill it! Once the yeast is stirred in, let it sit until you start to see bubbles (about 5-10 minutes). Then, mix in the yolk, salt and vanilla extract.

Step Two (Picture 2 above) - While stirring on low with a dough hook (or kneading by hand), gradually add ¾ cup of flour. If the dough is still very sticky, add the remaining ¼ cup. The dough should feel just barely sticky when you touch it after the flour's kneaded in really well. If after 1 cup of flour, it's still sticky, carefully mix a bit more flour in (1 tablespoon at a time). Mix the dough for another minute or two once you've finished adding all the flour. Make sure it's all together in a ball, and then cover the bowl and let it rise in a warm area for about an hour. While it's rising, make the filling - whisk together the melted butter, cinnamon and brown sugar.

Step Three (Picture 3 above) - Once the dough has about doubled in size, it's ready to be rolled out! Sprinkle a little bit of flour around a clean, dry countertop. Carefully grab the dough from the bowl and fold it into thirds. Flip it over, rotate it 90 degrees, and fold it into thirds again. Then, plop it on the lightly floured surface and roll it into a square that's about 12x12 inches. You might have to lift the dough up and gently stretch it with your hands (like pizza dough) and roll it out quite a bit, but it will get there and be pretty thin!

Step Four (Picture 4 above) - When you have your dough square, gently spread the cinnamon filling all around the dough's surface. Cover it as fully and evenly as possible. Then, fold the dough in half so that it's a 12x6 inch rectangle with the cinnamon on the inside. You might have to spread the corners out with your hands if it's a bit rounded.

Step Five (Picture 5 above) - Cut the rectangle into 12 equal strips (about 1 inch wide).

Step Six (Picture 6 above) - Put two strips on top of each other so that their open ends are on opposite sides, then twist them together. Form a circle and gently squeeze the dough ends to enclose the circle.

Step Seven (Picture 7 above) - Place in a greased donut pan and repeat for all 6 donuts.

Step Eight (Picture 8 above) - Let them sit out while the oven preheats and then bake until the donuts are light tan and the cinnamon filling is bubbling (about 15-20 minutes).

Tip #1 - Make sure your yeast is active. If the yeast doesn't bubble at all within 10 minutes of adding it to your warm milk mixture, it's probably dead. Start over and check the temperature of the milk before adding it. Make sure it's between 95-110°F. Also, make sure your yeast isn't too old and that it's been stored properly. I keep mine in a jar in the freezer!

Tip #2 - Spread the cinnamon filling carefully so it doesn't rip the dough. If your filling is too thick or hard to easily spread around the dough, you can heat it in the microwave for a few seconds and stir it up. I also like using my hands to spread it on the dough. You have more control this way, and it can be very therapeutic!

Tip #3 - Don't forget the cream cheese icing! It really takes the donuts to another level! You can make the icing thick to spread over them when they're warm, or thin to drizzle or dip them in! To go from thick to thin, just whisk in a bit of milk or heavy cream.

Can I make these with premade dough?

Yes! For an even easier process you can use a sheet of premade store-bought dough. I recommend Pillsbury Crescent Dough Sheets.

I don't have a donut pan, can I use something else?

These can be made in a muffin pan. Just twist them up so that they fit into the wells. They'll have more of a muffin shape instead of a donut shape, but they'll still taste delicious!

Can I use canned cinnamon rolls?

This has not been tested with canned cinnamon rolls. If you try them, please let us know how they turned out in the comments below!

Room Temperature: Unfrosted cinnamon roll donuts can be stored in an airtight container at room temperature for up to 1 week.

Refrigerator: Frosted donuts and cream cheese icing should be stored in the refrigerator for up to 1 week.

Freezing Instructions: Wrap the completely cooled, unfrosted donuts tightly in plastic wrap and/or a freezer-safe bag labeled with "Cinnamon Roll Donuts" and the date. When you're ready to eat them, heat in the microwave for 30-60 seconds and make the cream cheese icing.

Did you try this recipe? I'd love to see it!
Tag @brokenovenbaking on Instagram & Facebook and leave a ⭐️ review below! 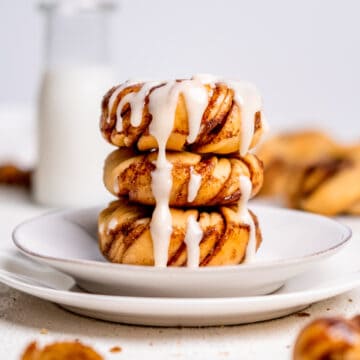 Store unfrosted donuts in an airtight container at room temperature for up to 1 week. Store frosted donuts in the refrigerator. Premade Dough: to make these even easier, you can buy premade dough from the store. I recommend using a Pillsbury Crescent Dough Sheet. Muffin Tin: if you don't have a donut pan, these can also be made in a muffin pan (or cupcake pan). Twist them up so that they fit into the wells. They'll have more of a muffin shape rather than a donut shape, but will be just as delicious! The provided nutrition information is an estimate, the calorie accuracy is not guaranteed.