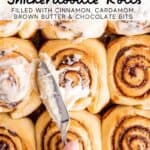 Snickerdoodle Rolls are better than your average cinnamon rolls! They're soft, fluffy and filled with brown butter, cinnamon, cardamom and bits of your favorite chocolate bar! The warmest of flavors for the coziest of dishes! Enjoy these for brunch with friends and family, They're perfect for the Holidays and special occasions! They can be made the night before so all you have to do is bake them in the morning!

One of my favorite and most popular cookies are my snickerdoodle cookies, so I decided to turn them into cinnamon rolls! Before I had ever tried making cinnamon rolls, I was extremely intimated by them. It seemed like such an overwhelming process and it uses yeast! However, after making them my first time, my nerves were calmed. I'm a visual/hands-on learner, so I put together a little photo tutorial to show the steps and how easy making them can be!

I love waking up to these on Christmas morning! For more cozy and delicious Holiday brunch and dessert recipes, check out my Gingerbread Brownies, Almond Butter Blossoms or Cinnamon Roll Donuts!

I recommend using a stand mixer with the hook attachment to make the dough. However, if you don't have a stand mixer, you can also knead the dough by hand.

A thermometer will help you ensure that the milk mixture is the right temperature before adding the yeast. If the temperature is too low, the yeast may not activate. If it's too high, it may kill the yeast.

Step One (Picture 1 above) - Bring the milk to a boil and then pour it into a stand mixer bowl. Stir in the butter so that it melts. Whisk in the sugar. Check that the temperature is 105-110°F and then mix in the yeast. Let it sit for about 5 minutes. When it starts to bubble, whisk in the eggs, vanilla and salt. If it doesn't bubble after 10 minutes and you confirmed that the temperature was between 105-110°F, start over with fresh yeast.

Step Two (Picture 2 above) - With a hook attachment, mix in the flour one cup at a time. After 4 cups have been added, gradually add more flour a little bit at a time until the dough pulls away from the bowl and is just barely sticky to touch. Cover the bowl with a towel and let it rest in a warm environment until it doubles in size (60-90 minutes).

Step Three (Picture 3 above) - While the dough is rising, make the filling. Brown the butter and then let it cool and mix in the brown sugar, cinnamon and cardamom.

Step Four (Picture 4 above) - When the dough has doubled in size, transfer it to a floured surface.

Step Five (Picture 5 above) - Fold the dough into thirds (like a brochure), flip it over, rotate it 90 degrees and fold into thirds again. Roll it out into a 16x20 inch rectangle.

Step Six (Picture 6 above) - Carefully spread the filling over the dough, leaving an inch empty along one of the long sides. Sprinkle chopped chocolate bar bits over the filling. Starting with the filled long side, tightly roll the dough into a log.

Step Seven (Picture 7 above) - Cut off the uneven ends of the log and then measure and mark it to make 12 equal snickerdoodle rolls. Tie a string of floss around the log where the marks are and pull it through the dough so that the swirls keep their shape! (See how in this short video!)

Step Eight (Picture 8 above) - Bake the rolls in a parchment-lined 9x13 inch pan, or refrigerate and bake them the next day. Make the cream cheese icing while they bake and then spread a layer of it on them right out of the oven.

Expert Tip: Let your dough rise in a room around 75°F. If needed, turn your oven on for a few minutes, turn it off, and place the covered bowl in the oven with the door cracked open. It should be about double its original size after 60-90 minutes.

This recipe has not been tested with any substitutions. If you do replace any ingredients, please let us know how they turned out in the comments below!

These snickerdoodle cinnamon rolls can be made up to a month ahead of time. To make them the next day, simply cover and put the pan of rolls in the refrigerator and then take them out while the oven preheats. For anything longer than 1 day (but up to 1 month), store them in the freezer and then let them thaw in the refrigerator the night before you plan to bake them.

How should I reheat refrigerated leftovers?

Reheat these in the microwave for about 30-60 seconds.

Why didn't my dough rise?

This could be that your yeast was inactive or that the room it sat in wasn't warm enough. Make sure the yeast foams in the milk mixture before proceeding with the recipe and have the dough rise in an area that's around 75°F. Turning your oven on for a minute and then placing the bowl inside with the door cracked should help create a warm enough environment for it!

What kind of chocolate bar should I use?

Whatever your favorite kind is! I like to use a toffee almond chocolate bar, but it's totally up to your preference!

Did you try this recipe?
Tag @brokenovenbaking on Instagram and leave a ⭐️ review below! 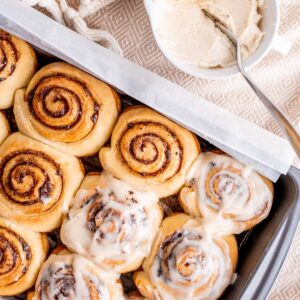 When the dough has risen:

To bake right away:

To bake later/the next day:

To make the icing:

When the rolls are done baking:

Store leftovers in the refrigerator for up to 1 week. Reheat in the microwave for 30-60 seconds. They can also be stored in the freezer for up to 1 month. The provided nutrition information is an estimate, the calorie accuracy is not guaranteed.

Be a part of our fun & supportive baking community where we choose a theme and share our bakes on Instagram every month!
November's Theme: Pie!