Banana Cream Pie is one of my all time favorite desserts! It's always been the most-loved treat that my grandma makes, which inspired me to create my own recipe for it with a graham cracker crust! The pie is no bake and refreshing as is, but I wanted to turn it into a no churn ice cream flavor. This Banana Cream Pie Ice Cream tastes just like the pie, but it's frozen and you can lick it off of a cone!

This post contains affiliate links, meaning that I could earn from purchases made through them. It doesn't add any extra cost to you, but it does help support this blog!

What You Need to Make This Recipe

Bananas: Mash them up for the main delicious fruit flavor!
Heavy whipping cream: Divvy it up to make the whipped cream & pudding!
Powdered sugar: Adds a touch more sweetness to the dessert!
Egg yolks: Helps give this no churn recipe a creamier texture.
Vanilla Instant Pudding Mix: An easy way to create the banana pudding aspect of the recipe!
Salt: Helps enhance the flavors.
Graham crackers: Sprinkle some crumbs in for the crust!

Shallow metal pan: I used a 7 inch round pan, but you could also freeze it in a similar metal/loaf pan.
Medium pot/saucepan: This will be used to cook up the pudding!
Hand mixer: I recommend using one of these to whip up the heavy whipping cream! It makes things go a lot faster and saves your arm some energy.

How to Make This Recipe

Start off by combining the egg yolks, vanilla pudding mix, salt, and half of the heavy whipping cream in a pot over low-medium heat. Stir it until it starts to bubble and thicken like pudding. Then, remove it from the heat and let it cool - this can be sped up by placing it in a bowl in the refrigerator.

While it's cooling, whip up the remaining cream with the powdered sugar. Make sure the cream is nice and cold to make the process go smoothly and quickly. You'll want to mix it with a hand mixer (gradually from low to high speed) until it reaches soft peaks (when the cream is stiff enough to hold itself together, but is still a bit droopy).

When the pudding mixture is cool, whisk in the mashed bananas. Then, gently fold the banana pudding into the whipped cream until everything is combined well. Alternately layer the ice cream mixture with graham cracker pieces in a metal pan, and then place it in the freezer for at least 4 hours.

Can I use frozen bananas for this recipe?

Yes, but you'll want to chop them up in a blender or food processor so they're creamy enough to mix into the pudding. For best results & flavor, I recommend using fresh bananas!

Can I use substitute or leave out the graham crackers?

Of course! Feel free to add bits of your favorite pie crust, Nilla wafers, etc. or leave them out completely!

Is this gluten free?

It can be! Try using gluten free graham crackers or you can make it without them.

How should I store this?

Covered in the pan in the freezer for up to 1 week.

How should I serve this?

I recommend letting the ice cream thaw for ~20 minutes so it's easier to scoop into. Serve it in a bowl, ice cream cone, topped with whipped cream, or however you like!

Did you try this recipe?
Tag @brokenovenbaking on Instagram and leave a star review below! 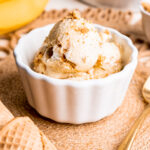 I recommend letting the ice cream thaw for ~10-20 minutes before scooping into it. Store in a covered container in the freezer for up to 1 week.

Hey, I'm Kayla! I'm a self-taught baker, recipe developer & food photographer in Chicago! This blog is a way for me to share recipes, tips, and everything I love related to baking & photography. If you have any questions or want to connect, I'd love to hear from you!
Read more →

BAKE & LEARN WITH ME!

You don't need to turn your oven on for these recipes!

Be a part of our fun & supportive baking community where we choose a theme and share our bakes on Instagram every month!
July's Theme: S'mores!